The first leg of my research year has just about come to a close. It’s been a simultaneously long and short six weeks in Nantes, France (see helpful map below), and I’m looking forward to see what Beirut has in store for me. I’ll get into the ins and outs of my research time, but I thought I’d devote this post to talking about some of the things I’ve been doing here that aren’t related to research.

As most anyone who knows me could tell you, I’m a fairly committed introvert and can very happily spend an entire weekend at home, enjoying a good book, podcast, show, or movie (or, all of the above). This means that I’ve read – or have started to read – a fair few books (all of the Daughter of Smoke and Bone series by Laini Taylor, Amy Poehler’s Yes Please, Diana Gabaldon’s Outlander series, and Yaa Gyasi’s Homegoing) and almost completed the crossword puzzle book I got to entertain me on the long flight from Los Angeles to London. I’ve also enjoyed Outlander (the TV show; it’s why I started reading the books), Brooklyn 99 (hilarious!), and Poldark (not too bad, with beautiful cinematography, though the writing falls short at times), all of which aren’t available on US Netflix – sorry – but are worth a watch if you can get them some other way, as well as some French news programs and crime dramas.

Located on the Loire river on France’s Atlantic coast, Nantes is a large city of almost a million people in its greater metropolitan area, and is the largest city in the region.

It’s also a very old city, having existed as a site of some importance since ancient times. In fact, there’s a place in the city, near the restored Chateau de ducs de Bretagne, that has been marked off as a historical site containing the remains of the oldest and newest walls in the city – from a wall built by the Romans in the third century, to those constructed in the medieval and early modern periods, all the way to the wall that surrounds the restored castle, built in the twentieth century. Near the castle is a cathedral, built in a style similar to that of Notre Dame in Paris, from what I can tell (The top two pictures below are of and from the castle; the bottom two are of the cathedral).

It’s history has also been shaped by the major events of the twentieth century, including both World Wars. There’s a large cemetery near the city center that includes grave sites for the French, French colonial (mostly Tunisia and Algeria, from what I could see), English, Belgian, and German soldiers who died in France during WWI. 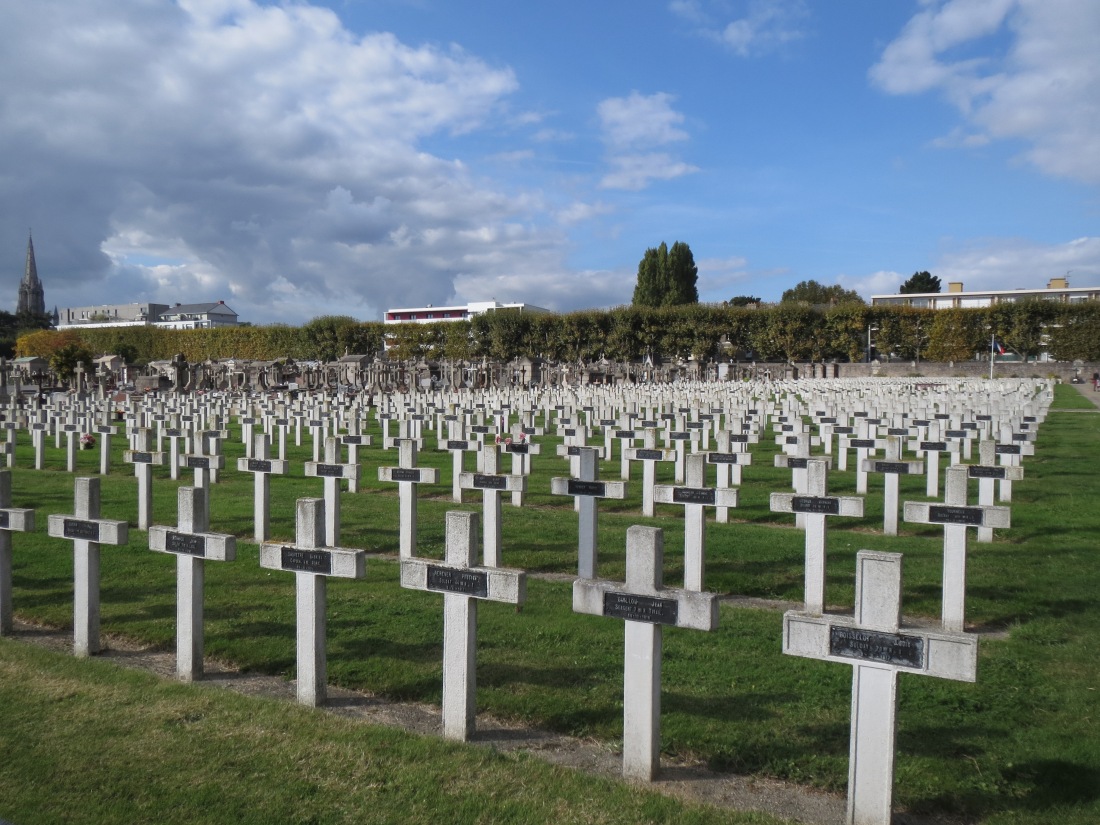 Aside from its history, Nantes has a pretty rich cultural life, with countless museums (many of which are free) and cultural events (also often free). I’ve made a habit of going to a permanent market that’s been in Nantes since the 1930s, Marche de Talensac; it’s open almost every morning of the week and hosts indoor, covered, and open-air stalls selling produce, meat, seafood, cheese, bread, art, bags, clothes, and a number of other things. I also enjoy regular to trips to one of the four boulangerie’s (bakery) near my apartment.

Since I’ve been here since late September, I’ve gotten to enjoy the changing seasons (which, unlike in southern California, isn’t only marked by the arrival of the pumpkin spice latte to your local Starbucks). When I first arrived, I would have my windows open wide and a tree across from my apartment was thick with green leaves. Now, I open the windows only a crack, just for fresh air, and find myself running the portable radiator for a bit in the mornings, just to get the chill out, and that same tree is now only sparsely filled with brilliantly-hued red-orange and yellow leaves. Fall has, I think, officially arrived.

Stay tuned for more on research and what I’ve been finding in the archive here!

One thought on “Hello from Nantes!”